The End In Sight 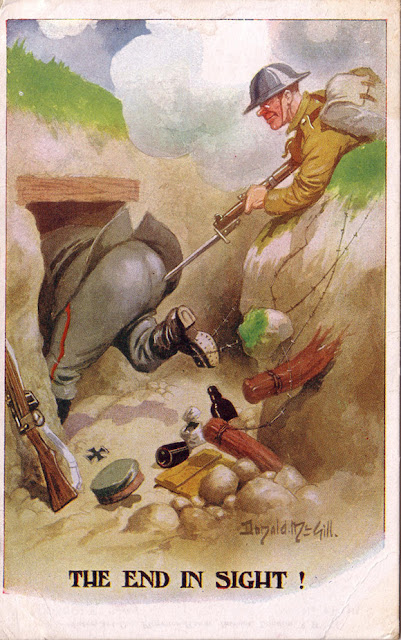 "It'll all be over by Christmas" and "The end in sight", words that were hastily spoken at the outset of the First World War. These words were far from the truth. Four long years of warfare followed and many lives from many nations were lost.

This postcard is an example of the profilic work of artist Donald McGill (1875-1962), a Londoner, and whose great talent it was that produced these wonderful and humourous depictions of people during the war.   He was very successful with his postcard artwork by way of covering so many different aspects of the war. A few notable military themes he covered were recruiting, training, patriotism, the home front, in the trenches, romance, spys and the navy. Of course many will know that Donald McGill's fame lay in the hundreds of saucy seaside postcards he would continue to produce right up to the latter years of his career.

Rifleman Frederick Baretta of the New Zealand Rifle Brigade purchased this McGill postcard to send to a fellow named Jack. He wrote;

Dear Jack,
Just a few lines that we are in camp at a place called Brocton about two hours run by train from Liverpool. We came through Panama Canal and ports of call were Colon, Newport News, and Halifax and landed at Liverpool on Dec 7th.
It was midnight when we reached in to camp. Their was ten boats left Halifax altogether for Liverpool, some with troops, Canadian soldiers and others loaded with mules and horses and food supplys.
It is a hell of a cold place here at present. It was snowing like hell on Sunday so we had to drown our sorrows in the hut. We have a wet canteen here but the beer is not like the coast.
Wishing you a merry xmas.
Rflm F. Baretta."

Frederick, a West Coaster born at Hokitika, and of Italian parentage, was a hard working sawmill hand for the West Coast Timber Trading Company and Baxter Brother's Mill at Humphreys', Hokitika. In 1917 whilst jacking logs on to a sawmill trolley, one of the logs suddenly rolled back on to Frederick. The resultant injury was serious damage to his left knee and he was hospitalised for many weeks.

Despite this injury he managed a good recovery and enlisted with the Rifle Brigade, embarking with the 30th Reinforcements on the ship Corinthic bound for Liverpool, England in October 1917.

By 1918 Rifleman Baretta was in combat on the Western Front and with only a few months remaining before the war would come to an end, he received gunshot wounds to his neck, chin and cheek. He was transported back to England to the New Zealand General Hospital at Codford before being moved to Hornchurch on the 11th September 1918. When the war finally came to an end in November, Frederick returned to New Zealand where he died in 1980.
Posted by Unknown at 22:10