Overthrow of the German Occupation of Samoa 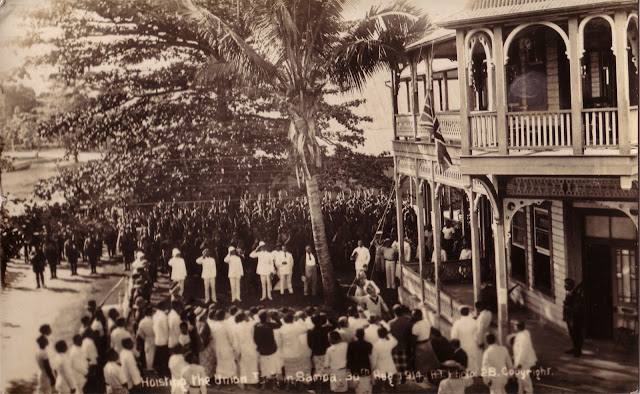 This photographic postcard was taken by Auckland photographer, Alfred James Tattersall (1866-1951) when working in Apia, Samoa in 1914.

Approximately 1,400 New Zealand troops formed the Samoan Advance Party of the New Zealand Expeditionary Force. They embarked on troopships Monowai and Moeraki which departed King's Wharf, Wellington on 15 August 1914. The voyage took these troops to New Caledonia and Fiji before reaching there final destination and objective, Samoa. The New Zealanders landed at the beach at Matautu Point before promptly occupying Apia.

The ceremony seen above, is to mark the overthrow of the German occupation of Samoa in to British Empire control. It took place outside the courthouse in Apia at 8 a.m. on 30 August. The Union Jack flag was hoisted to a 21 gun salute with the first gun fired by HMS Psyche out in the harbour. In the foreground are the Samoan High Chiefs of  Malietoa, Tanu, and Tamasese. In the square opposite them are a number of commanders from the naval escort including Captain Herbert J.T. Marshall of H.M.S. Psyche (in white naval uniform). Directly facing the flag hoist is Scottish born Colonel Robert Logan, commander of the Samoan Advance Party of the New Zealand Expeditionary Force, accompanied by his staff dressed in khaki uniform.

The capture of German Samoa was New Zealand's first military action in World War One. The German defences on the island were weak and the New Zealand occupation happened swiftly and without combat.

After the war, the League of Nations appointed New Zealand in 1920 to govern Western Samoa. These wonderful people and beautiful treasured islands of the Pacific gained political independence in 1962.
Posted by Unknown at 23:14