Australia and New Zealand Together 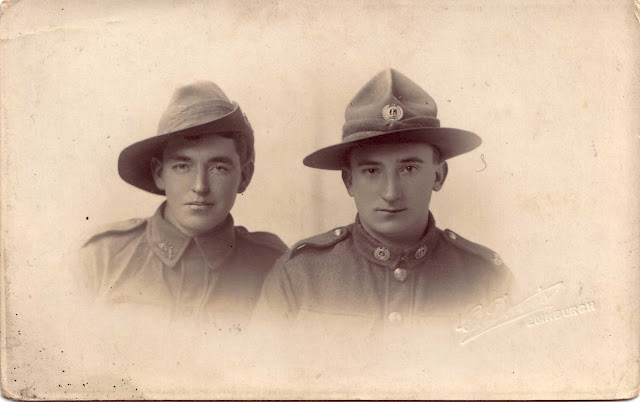 A wonderful portrait of an Australian soldier side by side with a New Zealand soldier of the 12th Nelson Regiment. This photographic postcard was taken in a studio in Edinburgh where so many troops took well-deserved leave before returning to the front lines.

Men of these two nations fought together at Gallipoli, in Sinai and Palestine, at the Somme, Messines, and Passchendaele to name but a few. It is not known whether these two young men survived the First World War but one hopes they both returned to their homelands. It would be nice to think that they reunited in peace time knowing that it is only the Tasman Sea to separate them.
Posted by Unknown at 22:33

Email ThisBlogThis!Share to TwitterShare to FacebookShare to Pinterest
Labels: Anzac