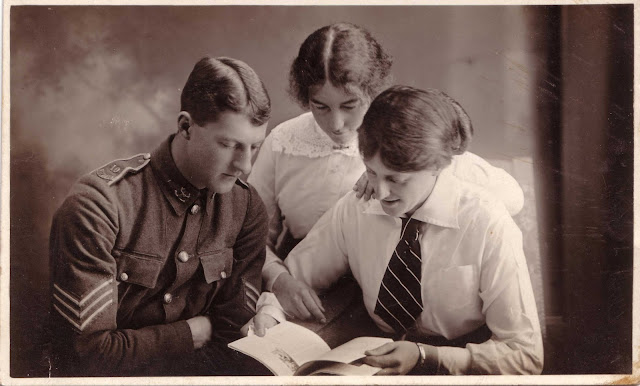 On the reverse of this postcard is the handwriting from one of the girls pictured;

“Eric Wanden, Maggie Macnabb & self but they say I am too serious therefore not natural. This is a snap of a boy friend who has enlisted & leaves this week. The other young lady is a cousin staying with us. I feel Eric’s going just as if a brother.”

Eric was just 21 years of age when he left New Zealand with the Canterbury Mounted Rifles as part of the Main Body sailing to Egypt. About ten months later, Eric was hit by a bullet that inflicted much damage to his lower jaw. He was invalided back to New Zealand on the troopship Willochra. He regained fitness and returned to the firing line in Egypt in 1917.

It was on the 25th September 1918 that tragedy struck. A witness report made by another Main Body man, Sergeant Charles Frederick Scrimgeour described how Eric met his fate;

“On the 25th Sept we were together at a redoubt just before . When galloping into action I saw him hit in the heart by rifle bullet and was killed instantaneously. He was buried that afternoon near the spot where he fell. A cross was made for the grave but I did not see it in place.”

The Wanden family would suffer another cruel blow when Eric's older brother Corporal Herbert Winn Wanden  died of wounds on 27 March 1918 in France. He is buried at Auchonvillers Military Cemetery. Younger brother Mervyn survived the war.