From life's tree a leaf has fallen 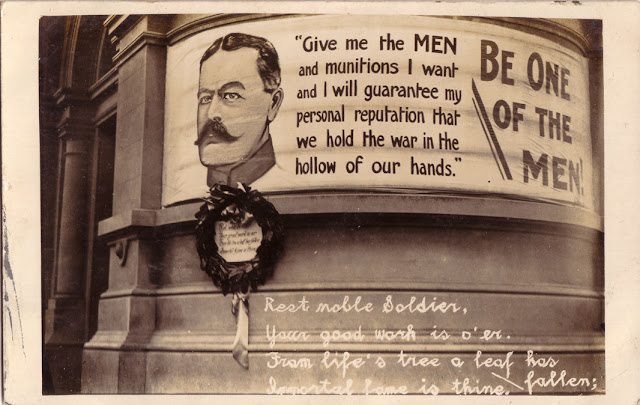 The familiar face of Lord Kitchener seen here on a large calico banner hanging from the Bank of New Zealand on Lambton Quay and the bottom of Willis Street in Wellington.

This large recruiting sign has the quotation from one of Kitchener's speeches;
"Give me the men and munitions I want and I will guarantee my personal reputation that we hold the war in the hollow of our hands."

This real photographic postcard is dated to October 1915. With just a little over seven months later, Field Marshal Horatio Herbert Kitchener was killed when HMS Hampshire was sunk by a German mine a few kilometres off the coast of the Orkney Islands on 5 June 1916.
Posted by Unknown at 23:23