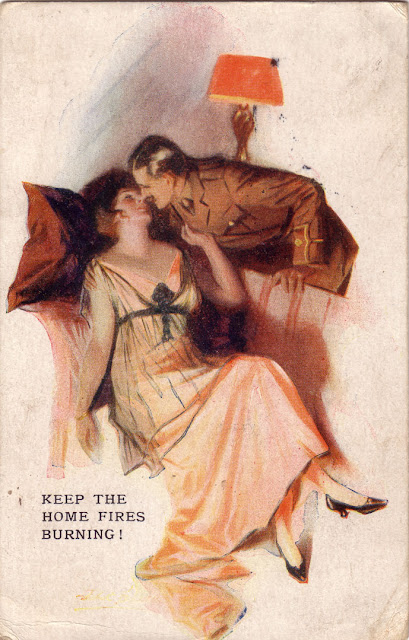 "Keep The Home Fires Burning!" postcard by an unknown artist.

"Keep The Home Fires Burning", a phrase often found on postcards during the First World War, rich with sentiment and patriotism from loved ones at home, keeping spirits high and preserving a warm home until husbands and sons return from war.

This phrase also features in a song composed by Ivor Novello and words by Lena Ford in 1914. The song was initially published as 'Till the Boys Come Home' but in the following year a further edition was released as 'Keep the Home Fires Burning'. The chorus says it all;

While your hearts are yearning.

Though your lads are far away

They dream of home.

Through the dark clouds shining,

Turn the dark cloud inside out

Till the boys come home."

The addressee on the back of this postcard is an interesting one;

It was written by Private Gatley's cousin Vi and postmarked on 15 April 1918;

Thanks awfully for your nice long letter. It is very sad concerning Mrs Stanaway. I will write a long letter. Trusting you are quite well mind.

Private Nathaniel Johnston Gatley, born 21 April 1883 in Otautau, a horse trainer from Riverton enlisted in the Otago Infantry in 1917 and embarked with the 28th Reinforcements for England on 26 July 1917. The troopship he was travelling on arrived at Plymouth England in September and the next stage of the journey for the New Zealanders was a train bound for Salisbury Plain where they would have further military training at Sling Camp before moving to France. On this train journey, a tragic accident occurred at the small railway station at Bere Ferrers in Devon. The troop train had come to a temporary stop to allow the passing of an express train travelling in the opposite direction. A number of New Zealand soldiers believed it to be a refreshments stop and were unaware of the scheduled express train. They climbed down from their carriage on the wrong side and on to the railway tracks and were cut down by the oncoming express train. Ten men were killed and two injured;

Private Gatley's injury was a broken arm and he was sent to the Tavistock hospital and then on to Codford and Hornchurch. After recovering from this accident he was back at Codford after contracting a bout of bronchitis and it is during this time that he received the above postcard from his cousin.

In the Bere Ferrers Parish Church there is a memorial to those New Zealanders who died on 24 September 1917 in this tragic accident. A brass tablet affixed to the chancel wall behind the pulpit bears the names of those killed and states that "...This tablet is erected in their honor and memory by the people of Bere Ferrers parish and other admirers in appreciation of their loyalty and self sacrifice in coming from their far-off homes to fight for England in the great war for the freedom of the world." Another memorial also appears on the plinth of the Bere Ferrers village war memorial.
Posted by Unknown at 14:12