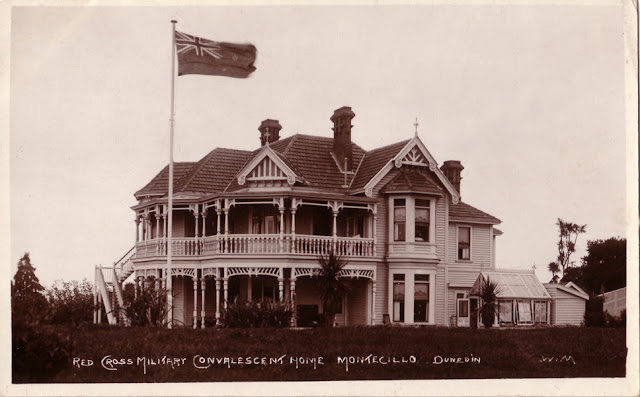 This elegant thirteen-roomed house located on Eglinton road in Mornington, Dunedin was set on grounds of about 3½ acres. The house was opened as a Red Cross Military Convalescent Home on 27 June 1918. At the time of opening, the home had accommodation for approximately twenty-four and serviced the wounded and sick veterans from the Boer War and First World War. A new building with two rooms divided in to a works room and a recreation room with a billiards table opened in 1919. A massage room was administered by Miss Ensor. Displayed on the wall of the entrance hall hung a commemorative red pine tablet with a brass plate designed by artist Mr Robert Hawcridge. It recorded the names of those who donated £100 or more to the cot endowment fund which was a much needed source of money for the purchase of cots for the convalescent home.

Agnes Macmillan, of Milton, who worked at a Presbyterian Orphanage on Blighs Road in Papanui in 1912 and the Dunedin General Hospital, later saw service in military hospitals at Wimereux and Bolougne in France from 1915 to 1916. She was appointed Matron of the convalescent home at Montecillo in 1918. She was assisted by some voluntary nurses; Miss Ogston, Mrs Arthur Stronach, and Miss Brenda Bell, and in 1920, Sisters Thomson and Oppenheim.

The longest resident was Trooper Thomas Frederick McCarthy of the Otago Mounted Rifles who died in 1973. Another resident was Sergeant Newton Hanan, Otago Infantry Battalion, who took a gunshot wound to his back during the fighting in France in 1916. The wound resulted in paralysis and loss of use of both legs. He was invalided back to New Zealand and eventually became a resident of Montecillo until his death in 1922. Major Gordon Mitchell, Troopers Jardine, Sanders and Muir were also some of the WW1 veterans who were resident at the convalescent home.
Posted by Unknown at 22:56