A Touch of Silk 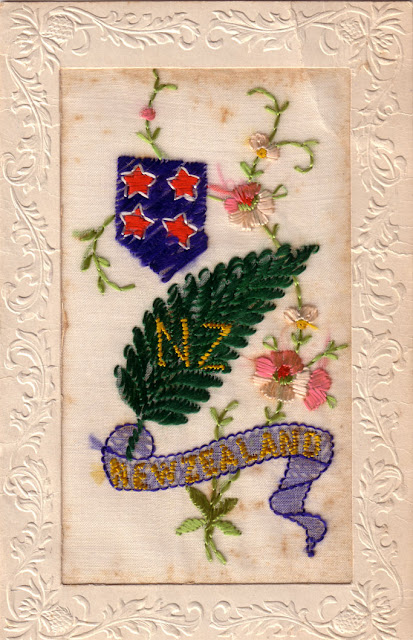 Brightly coloured embroidered silk postcards that captured the patriotism and sentiments of the First World War were popular purchases by soldiers on foreign soil. These postcards were mainly produced in France and many embroidered by women in a cottage industry that provided an important income for themselves and their families during hard economic times.
It is estimated that New Zealand soldiers earned approximately 5 shillings a day. The affordable picture postcard could be purchased for a penny. However, the embroidered silk postcard was priced much higher at about sixpence each which made this an expensive purchase on a soldier's income.

This wonderfully coloured silk postcard seen above, was a popular design bought by New Zealand soldiers. This one was written by 'Will' to his cousin 'Lily' while stationed at Codford (Command Depot and No.3 New Zealand General Hospital) in Wiltshire;

Dear Lily,
Just a few lines to let you know how I am getting along well.  I suppose you will all be surprised to know that I am going back to France to fight old Fritz again. I have got sick and tired of being in this camp so I went and told the doctor that I was ready for France again so I will be leaving this camp for Sling camp. That’s where they draft us for France. So if you don’t get any letters from me for a long time you will know I am in the trenches. So goodbye.
I remain your affectionate cousin, Will.”

Assuming that Will completed his training at Sling camp, he faced the major battles of Messines and Passchendaele later that year where many New Zealand soldiers lost their lives.

It is not known whether Will survived the war and if Lily ever heard from her cousin again.
Posted by Unknown at 22:47