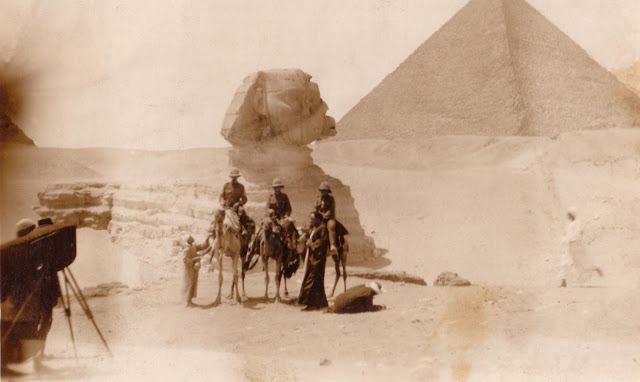 Three soldiers away from the firing line pose on camels with the spectacular backdrop of the Sphinx and Pyramids of Giza in Egypt.
This very popular site gave allied soldiers on leave the opportunity to have their photograph taken, published on to a postcard, and sent home to loved ones.
Note the Egyptian photographer behind the camera tripod to the left of this picture. 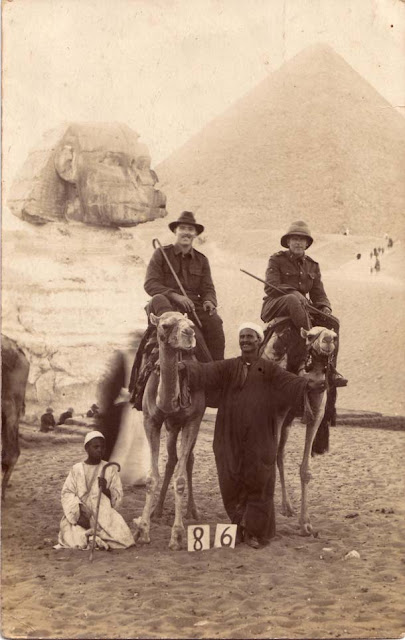 Real Photo Postcard. No postmark or postage stamp. Unknown printer / publisher.
William Croson pictured on a camel with the same spectacular scenery and location as seen in the other postcard above.

William wrote the following message on the back of this postcard;

“The mode of transit here is mostly Camels, Mules, & Donkeys. You will see we are looking round the pyramids on Camels.
Kia Ora, W. Croson”

William Croson, born in Leicester England in 1886, was a self employed engineer and qualified mechanic. In 1914 he hit financial hard times and left his business to enlist in the army in Auckland. William joined the Divisional Signal Company, New Zealand Engineers and embarked on the troopship Willochra destined for Suez Egypt in August 1915.

Sapper Croson joined his unit in Gallipoli on 26 October 1915 but just less than a month later he was sent to St Paul’s Military Hospital in Malta on the ship H.S. Gloucester Castle suffering from rheumatic fever. He was back in active service by February 1916. He returned to New Zealand on the troopship Ulimaroa on 17 March and discharged from military service in October that same year on the account of his illness.
Posted by Unknown at 21:13