The Sinking of the s.s. Rotorua. 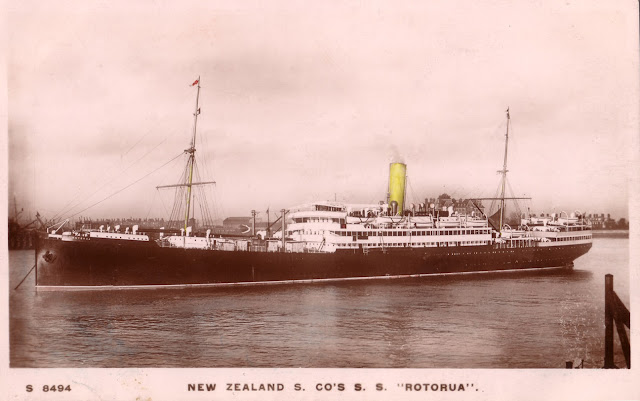 The New Zealand Steamship Company's s.s. Rotorua. She was built and launched by William Denny & Bros, Dumbarton, Scotland on 9 July 1910. She made her first New Zealand voyage from London to Wellington on 27 October 1910.

An interesting comment was made by the Rotorua's storekeeper Harry T. Gray and reported in the Ashburton Guardian newspaper in 1918. He tells the story of when the Rotorua had stopped for coal at Newport News in Virginia en route from Wellington, New Zealand in February 1917. Someone had written in chalk in large letters on the side of the ship "This is the last voyage of the Rotorua". On 22 March 1917 this prophecy came true. The Rotorua was torpedoed and sunk by German UC17 under the command of Ralph Wenninger in the English Channel just 24 miles east of Start Point. Captain Sutcliffe and all the Rotorua crew were saved except for Assistant Steward Daniel Henry Williams, a Londoner age 39 who had signed on at Wellington. The Rotorua had been carrying a cargo of mutton, beef, cheese and butter valued at over £400,000 and all of this was lost.

Today the wreck of the Rotorua is of interest to recreational divers and she lies on her side at a depth of approximately 60 metres.
Posted by Unknown at 21:59