Debut Of The Tank 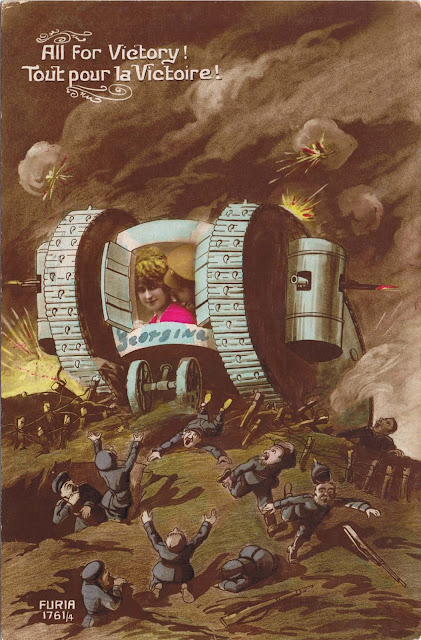 "All For Victory!". A french postcard published by Furia.
It shows German soldiers fleeing from a British tank advancing over barbed wire obstacles.
The front hatch of the tank reveals a photograph of a British soldier and his girlfriend.
Underneath this Private Troon has handwritten 'Georgina'.

This postcard was sent to Georgina from Private James George Troon, 9/1994, New Zealand Medical Corps when he was based at the New Zealand Stationary Hospital in France in April 1918. He writes;

"Dear Georgina,
I was so pleased to receive your letter yesterday. My word you must be growing a big girl. I don't think I would know you now. What do you think of this picture? It is our big tank in action: see the Germans running away. They really did run when they saw our big monster the first time. Well I hope to be home soon and then I will come and see you and you can take me for a walk.
I am your loving cousin, Jim."

Private Troon is likely referring to the New Zealand Division's first major battle on the Western Front. This was the Battle of Flers-Courcelette in France in September 1916. On the 15th of that month, tanks were used in battle for the very first time. Although very slow moving, a number of these early tanks successfully penetrated barbed wire and trench systems, offered protection from enemy rifle and machine gun fire and drove fear in to German soldiers confronting these metal monsters.
Posted by Unknown at 22:20