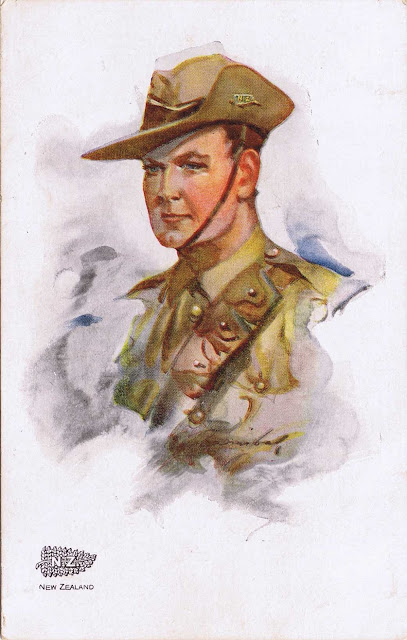 Many postcards in circulation during the First World War were either real photographic cards or the popular embroidered silk cards. However another very large portion of the postcard market was from artwork produced by many well known artists. Some of their illustrations and paintings were used by postcard publishing houses and distributed and sold to an eager public ready to write messages to and from the war zone. The art was produced in a wide range of themes including but not limited to comic, romance and patriotic as shown in the example above.

This postcard of a New Zealand soldier is part of a set produced by artist William Henry Barribal (born 1879 - died 1956). The set features servicemen of the Empire and they are identified on the reverse side of the cards with "No.1049". Others in this set include servicemen from Australia, Canada, India and South Africa.  They were published by a very well known London fine art dealer Alfred Vivian Mansell. He established his publishing premises at 2 Chapel street and 22 Silk street in the heart of what was referred to as "The Postcard Mile" in London. Other large neighbouring publishing firms included those of J. Beagles & Co. Ltd, Gale & Polden Ltd, Rotary Photo Co. Ltd and arguably the biggest of them all, Raphael Tuck & Sons Ltd.

Artist William Barribal studied art at the Académie Julian in Paris. A famous New Zealand artist, Charles Frederick Goldie was also a student at this private art school. William married an art student who became his inspiration and model for glamour artwork of a woman who became known as the 'Barribal Girl'.
Posted by Unknown at 21:53