Feeling Blue in the Hospital Blue 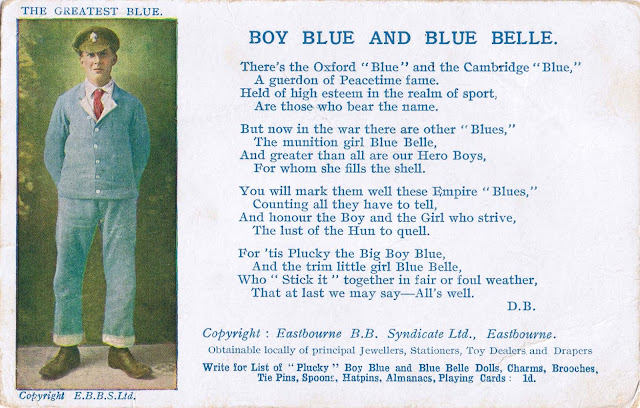 Written on the back of the 'Boy Blue And Blue Belle' postcard;
“You will notice how Tommy has turned the bottoms of his trousers up – Kris informs me this is “the fashion” – but thank goodness neither he nor his friend follows “the fashion”. Kris does look hugh in Hospital Blue but he also looks such a dear little boy. I do hope he is able to return to you soon for I’m sure you must miss him awfully.”

In the midst of overwhelming khaki-uniformed allies was the distinctive hospital blue uniform worn by convalescent soldiers. The unflattering and unfashionable look of ill-fitting pyjamas left many soldiers feeling too conspicuous and uncomfortable in the compulsory attire.
The garments were made of blue serge with a white flannelette lining. Design and size were kept simple to accommodate all shapes and sizes of recovering soldiers from non-commissioned ranks. The oversized shirt and trouser lengths resulted in overturned cuffs and sleeves. The uniform included a red tie and often the only khaki worn, was that of their regimental hat. 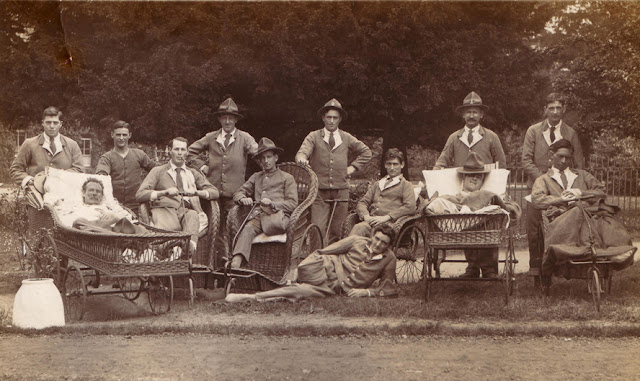 Real photographic postcard most likely taken in the grounds of the New Zealand Hospital at Oatlands Park in Weybridge, England.
New Zealand soldiers dressed in the 'Hospital Blue' uniform. Those pictured in the front row have all lost limbs.

Objection to wearing the hospital blue uniform was not only made by convalescent soldiers in England but also at home in New Zealand. On 12 March 1919 the Marlborough Express newspaper reported;

“HOSPITAL BLUE.
AN OBJECTIONABLE UNIFORM
[Press Association.]
Christchurch, March 12.
The majority of sixty soldier patients in Christchurch Hospital declined the invitation to a garden party given by the Governor-General owing to the fact that it would be necessary to attend in hospital blue uniform, to which they objected.
The Returned Soldiers’ Association carried a resolution expressing regret that arrangements had not been made to allow the men to attend in dress uniform.”

On a visit to Dunedin in May 1919, Sir James Allen was quickly made aware of some protest from convalescent soldiers at the Montecillo Home. Unsurprisingly, they too were unhappy with the poor fitting and the unwanted attention that brought on ridicule from some sections of society. Sir James, sympathetic to their views, defended the uniform; “The new uniform, instead of being the subject of ridicule, should demand the highest respect…as it is the distinguishing mark of those who have suffered for us.”
Further defence of the uniform by means of enforcement, was the ability for Military Police to arrest any civilian guilty of ridiculing the men in blue.

In many cases, soldiers in care at hospitals and auxiliary homes found themselves on a long road to recovery. This was hard on mind and body, and the lure of alcoholic liquor was an opportunity to ‘drown the sorrows’. With health and well-being the key objective for medical staff, regulations prohibited civilians from supplying alcohol to the men in blue.

Despite these wounded soldiers feeling blue in the ‘Hospital Blue’, many civilians identified them as heroes and were appreciative of their loyal service to King and Country.
Posted by Unknown at 17:48