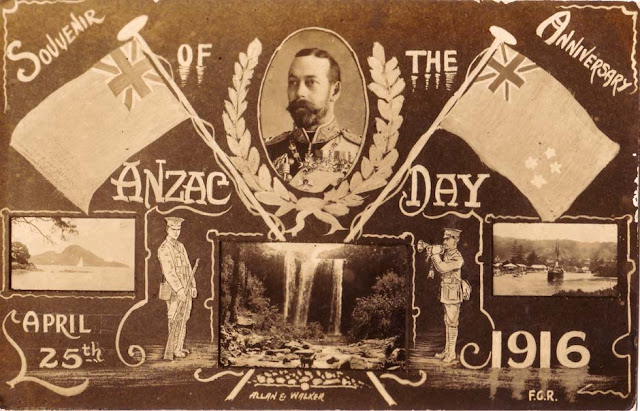 This postcard was produced by Whangarei-based Frederick George Radcliffe ('F.G.R.') and features images of crossed flags, a photograph of His Majesty the King, photographs of New Zealand scenes and two New Zealand soldiers.

The significance of this postcard is that it was produced as a souvenir to mark the first anniversary (25th April 1916) of the ANZAC landing at a cove north of Gaba Tepe on the Aegean coast. Of course it is this cove that we now know as 'ANZAC cove'. Its dominating high cliffs and difficult terrain made it advantageous to the defending Turkish army who claimed many Australian and New Zealand lives on 25 April 1915, the first day of the ANZAC invasion on the Gallipoli peninsular.

His Majesty King George sent the following message to the people of New Zealand on the first anniversary of the Gallipoli landing;

"Tell my people of New Zealand that to-day I am joining with them in their solemn tribute to the memory of their heroes who died in Gallipoli. They gave their lives for a supreme cause in gallant comradeship with the rest of my sailors and soldiers who fought and died with them. Their valour and fortitude have shed fresh lustre on the British arms. May those who mourn their loss find comfort in the conviction that they did not die in vain, but that their sacrifice has drawn our peoples more closely together, and added strength and glory to the Empire."

On the back of this postcard is an assortment of handwritten names and notes recorded by a New Zealand soldier far from home. I especially dedicate this posting to those named;