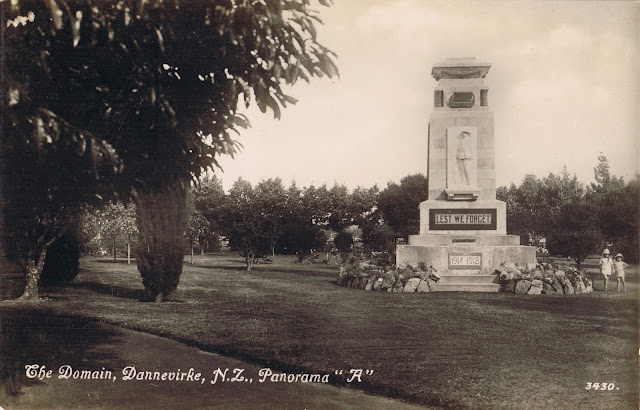 The Dannevirke War Memorial was unveiled in front of a large crowd on Anzac Day 1924. Mr E.A. Ransom, M.P., performed the unveiling ceremony and was assisted by Dannevirke’s Mayor Mr A.J.C. Runciman, ex-Mayor Mr C.J. Anderson, and the president of the local R.S.A. Mr Ivan Light.
The memorial is located on High street at the Dannevirke Domain. The names of some 232 WW1 and 73 WW2 service personnel are recorded on the memorial’s plaques. A smaller plaque sits above the impressive sculpture of a New Zealand soldier. It reads;

“Roll of Honour
In memory of volunteers from Dannevirke & District who gave their lives for the defence of the Empire in the war of 1914 – 1918”. 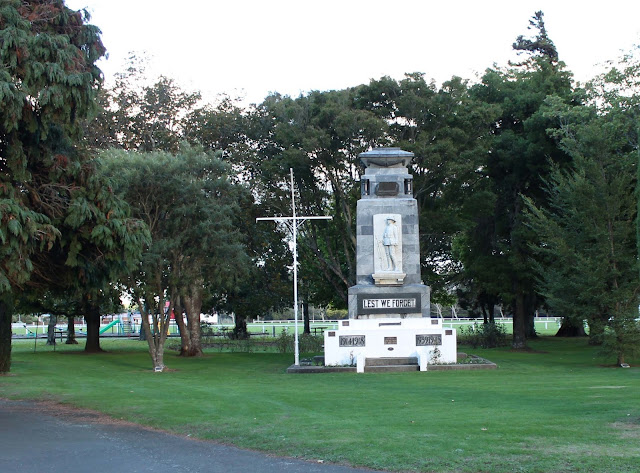 This more recent photograph, taken on the eve of Anzac Day 2013, shows the addition of "1939-1945" to the memorial’s base following the Second World War.

This memorial holds dear to me through some family connections;

Three brothers with the surname Doria are among those remembered on the memorial. Birley age 21 died of sickness at Codford Hospital England on 30 December 1916, Leonard Jack age 19 killed in action at Messines in Belgium on 8 June 1917, and Percy age 23 died from gunshot wounds to his head and spine at St Omer in France on 16 October 1917. 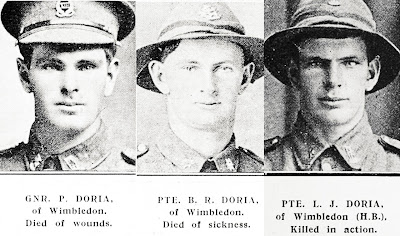 During the Second World War, Private George Gordon Drummond Mangos of the 25th Battalion New Zealand Infantry was captured during the battle of El Alamein. George was among some 3,000 prisoners on board the Italian troopship Nino Bixio which sailed from North Africa across the Mediterranean Sea bound for Europe. A British submarine HMS Turbulent was unaware of the troopship’s prisoner of war passengers and having identified Nino Bixio as an enemy vessel, fired two torpedoes in to her on 17 August 1942. One of these tragically found the ship’s hold where many prisoners were held captive. There was a terrible loss of life, not only from the explosion but also from those who had jumped overboard with little chance of rescue. Some drifted about on rafts and wreckage on the Mediterranean for days without food and water. Many died but some were saved. George Mangos was one of about 110 New Zealanders killed that day. He was just 25 years of age. Just a year earlier, he announced his engagement to be married to my grandmother’s sister Ellen Janet Luscombe. Sadly, Ellen would never see him again.