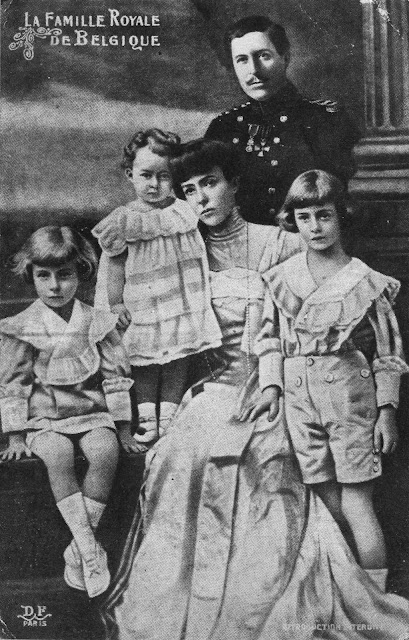 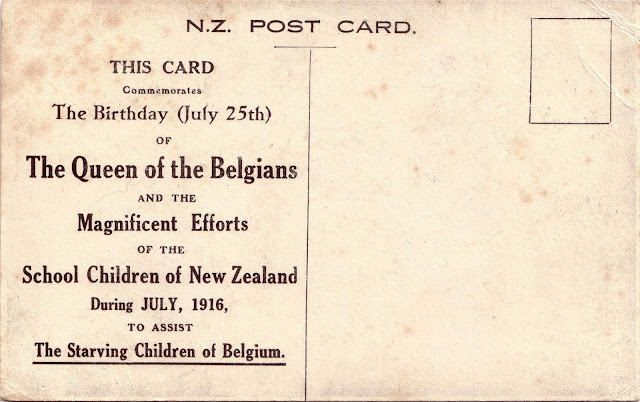 Most of Belgium was occupied by the German Empire during the First World War. Its towns, cities and countryside was ripped apart by the ravages of war. The Belgian people suffered terribly, many were homeless and struggling to survive. Food, water and shelter in their homeland was scarce.

New Zealand, among other representing nations of the British Empire realised the desperation of the situation in Belgium. Right throughout the country, New Zealanders endeavoured to make a difference by contributing money and resources to those in need in Belgium. As evident in print on the postcard shown above, New Zealand school children worked with great spirit to raise money to help the starving Belgian children.

Many New Zealand schools contributed to the Belgium Fund during the war. Some examples include; Hikumutu school near Taumarunui had longed for a school library but they unselfishly gave up this idea and instead donated the money to the Belgian Children's Fund in 1916. Ellesmere school held a concert and raised over £30. The school pupils at Whakarewarewa "cheerfully gave up all their lollies and their Saturday afternoon 'pictures' " and in doing so raised over £20. School children from all over Wellington took the leading role in hosting a large Produce Fair at the Wellington Town Hall on 27 and 28 July 1916. It was officially opened by His Excellency the Governor, the Earl of Liverpool. A vast array of produce provided by the province's farms was successfully sold with all takings going to the Belgium Fund. Among the stalls of potatoes, pumpkins, swedes, marrows, jams, cakes, rabbits, pigs, turkeys, geese, ducks and some 800 dozen eggs was the sale of some dainty lingerie made by the boys of the Weraroa Boys' Farm. They say, 'variety is the spice of life!' Similarly, Paparoa Infant school in Nothland, Karekare school near Piha, and Waituki school all made contributions to the same good cause.

School girl Muriel Brown of Aranui school near Christchurch, under the approval of the school's headmastress wrote a letter to the Lord Mayor of London, chairman of the National Committee for Relief in Belgium;
"I am writing this letter on behalf of the children who attend the little school in Aranui (50 children), which is five miles from Christchurch, New Zealand.
In response to your appeal for the starving children of gallant little Belgium, we gladly did what we could to show them our loving sympathy.
On Monday, 10th July, we held a juvenile bazaar and in the evening we gave the best entertainment we could, and to our joy we managed to gather £15. Just ten minutes ago two of the big boys rode out of the playground on their bicycles carrying the money to give the secretary of the Board of Education, and as they went off we all gave three cheers for the Belgians.
We hope our gift will help some poor little children to get a good meal such as we enjoy every day in the sunny land of New Zealand.
Yours faithfully, Muriel Brown."
(source: Hawera and Normanby Star, 24 October 1916, pg 5)

The schools of New Zealand successfully raised a sum of £5,400 as the first instalment sent for Relief in Belgium and continued to raise more money throughout the war not only for the Belgians but for other good causes such as the Red Cross, YMCA, New Zealand military hospitals, Sailor and Soldier Funds and others. 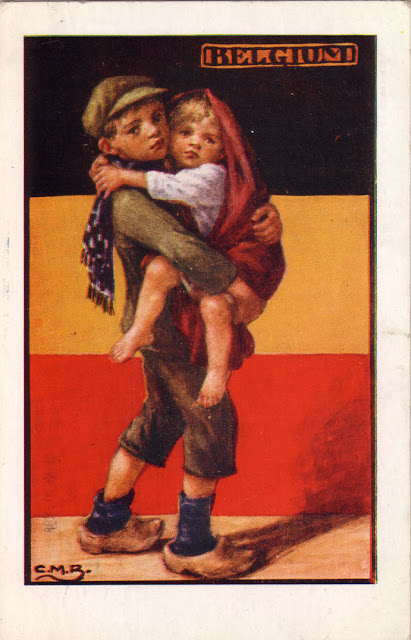 Patriotic postcard of "Belgium - Children of the Allies" by artist Cicely Mary Barker (1895-1973).
This postcard was printed and published by J. Salmon, Sevenoaks, England.
Posted by Unknown at 22:46