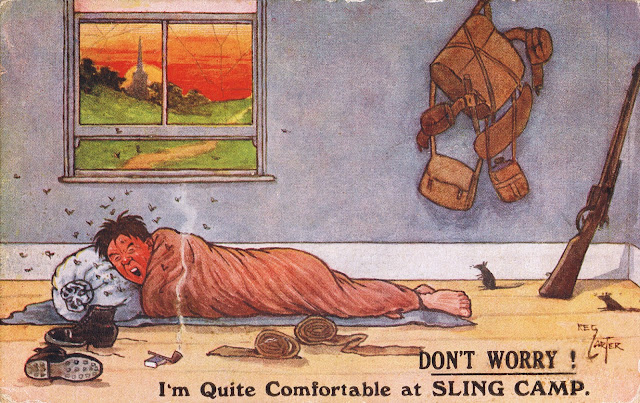 Comfortable at Sling Camp..."I Don't Think"! This military camp situated in the cold bleak landscape of the Salisbury Plains in Wiltshire often received unfavourable comments from many New Zealand soldiers who trained there. Not only was there a dislike of the camp's isolated location exposed to wind and weather, but also they dreaded the hard and unforgiving camp discipline, parades, lectures, and long route marches. Despite this, the training at Sling Camp in bomb fusing and throwing, gas mask drills, Lewis machine gun instruction and trench digging helped to strengthen the New Zealand fighting force before final departure to the battle fronts in France and Belgium.

Dear Father,
I met Jim Hollow last night  in our canteen. He is going back to the trenches in about 2 weeks. His brother Bill is in the trenches now. Jim is in the next camp to ours. His hut is only about 300 yards from ours. I will write first chance there is. Nothing but snow, mud and rain here. It is decent drilling in the mud.

James lost his older brother William just four months before writing this postcard. William was killed in action at the Somme.

When the 14th Reinforcements training at Sling finally came to an end they received their posting orders for the battlefields of Belgium and France. The New Zealanders were in the thick of the fighting at the Wytschaete-Messines Ridge in Belgium in June 1917. Despite the casualty list, the heat and the thirst, the New Zealanders were victorious in driving out the Germans from the town of Messines. Four months later, the casualty lists grew to horrific numbers and the heat was replaced by rain and mud. This was Passchendaele and for Private James Walker, this is where the war came to an end. He was killed in action on 4 October 1917 at just 23 years of age. James' cousin Jim Walker Hollow whom he mentions on the postcard above, died on 12 October just 8 days after James was killed. This date is well documented and remembered as New Zealand's blackest day owing to the large number of New Zealand casualties.
Bill Hollow, also mentioned, survived the war. 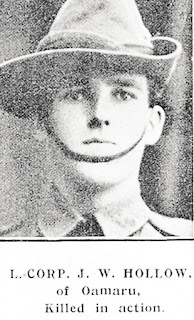 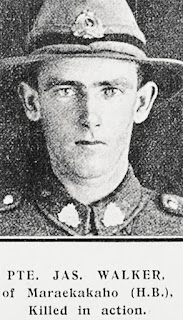 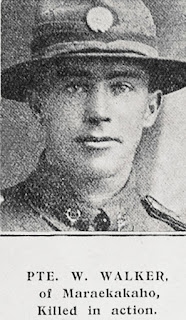 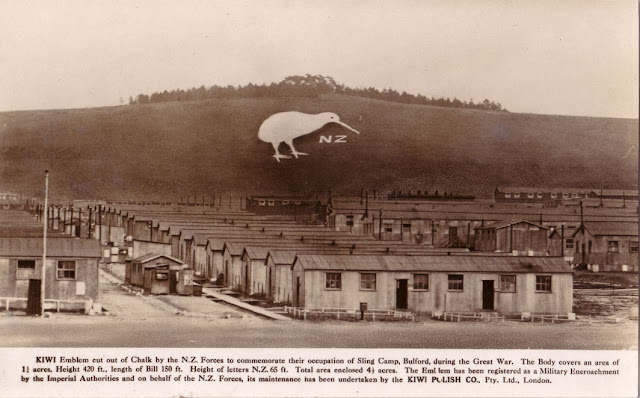