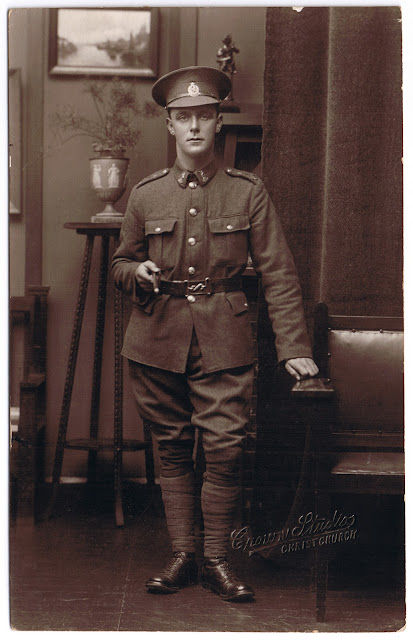 Rifleman James Stephen Hawkins, with a swagger stick tucked under his arm, portrays the style of so many soldier portrait postcards taken of the era. Solemn faced, sharply dressed and standing proudly in uniform, he prepares himself for whatever may lie ahead. The son of Stephen and Lily Hawkins of Christchurch, he was educated at Woolston School and before the war was employed as a grocer's assistant for C.M. Suckling at Tai Tapu.

James Hawkins left with the 26th Reinforcements New Zealand Rifle Brigade on 12 June 1917 from Wellington on the troopship Maunganui (HMNZT 86) destined for Devonport in England. By late October he was on the battlefields of France and was killed in action less than four months later on 15 February 1918. The Press announced his death on 19 March 1918:

“Rifleman J.S. Hawkins (killed) was the son of Mr and Mrs S. Hawkins, 152 Ensor’s road, Woolston. Prior to going into camp he was employed by Mr Suckling, of Tai Tapu. For many years he was a member of the Linwood Football Club, and also took a keen interest in all sports. He was educated at the Woolston School, and left with the 26th Reinforcements.”

The Secretary of the NZEF War Graves Committee wrote to James’ father on 11 November 1920 to inform him that James’ body had been exhumed from an isolated grave and laid to rest in Oxford Road Cemetery about 1.5 miles north east of Ypres in West Flanders, Belgium.