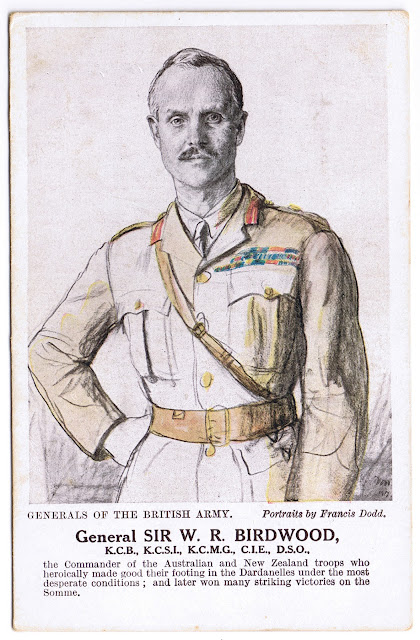 “General Sir W.R. Birdwood.”
A British postcard from the “Generals of the British Army” Series and portrait artwork by Francis Dodd.

Affectionately called "the Soul of Anzac" and "Birdy", General William Birdwood was the famed commander of the Anzac Corps at Gallipoli in 1915. He led the Anzac landings at the Dardanelles and the eventual planned evacuation from its bloodied beaches about a year later.

In the war years that followed, he was often not far from a kiwi connection. He presented gallantry awards to brave New Zealand soldiers, attended Anzac Day ceremonies, took salute from New Zealanders on parade and attended military funerals alongside high ranking New Zealand officers such as that of the burial of New Zealand Brigadier General Francis Earl Johnston at Bailleul in France in August 1917.
He visited New Zealand after the war in mid-1920. General Birdwood, Lady Birdwood and their daughter departed Sydney for Wellington on the ship Manuka. During their stay in the capital, a civic reception was held for General Birdwood at the Wellington Town Hall. Many returned soldiers, sailors and nurses attended the reception to pay tribute to this admired military leader. His visit included a trip to Nelson, and studio portraits taken by renowned photographer Herman Schmidt in Auckland.

Birdwood died in 1951 and is buried at Twickenham Cemetery in England. His name is honoured throughout New Zealand: the Birdwood Range in the Canterbury foothills, the location of the Anzac Club on Birdwood Street in Featherston, Birdwood Avenue in Christchurch, Birdwood Crescent in Parnell, Auckland and Birdwood Street in Karori.
Posted by Unknown at 23:21