Postcards, letters, items of clothing such as socks, gloves and scarves, cake and the traditional Christmas pudding were all sent from friends and loved ones at home in New Zealand to their soldiers thousands of miles away. These simple pleasures of home brought to New Zealand soldiers at the frontline trenches meant the world to these men. Our men in khaki were spending their livelihood in and out of danger, focussed on survival and of course with a mind to win the war and see peace finally restored. Christmas was a particularly difficult time for many. The season was meant to be festive and joyous, bringing goodwill to all men, and a time for family coming together. War brought an end to that.
Christmas gifts from home gave the soldiers a momentary distraction from the war causing them for that brief moment to reminisce and make a special heartfelt connection with the sender. 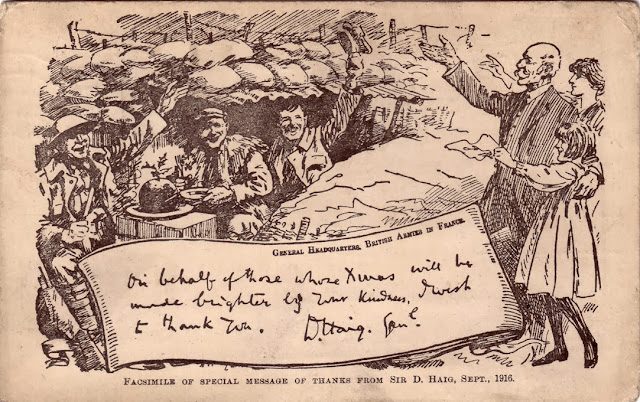 This British postcard was used and sent by the "Daily News" in London to acknowledge and thank all those who financially contributed to a subscription which helped supply soldiers with Christmas Pudding in December 1916. On the back of this postcard, the subscriber receiving thanks is a Miss Edith Mont of Willaston School in Cheshire. The message indicates that she donated 1 shilling which provides Christmas pudding for 2 soldiers at the Front. Recorded in finer print on the card is the various financial subscriptions which are proportioned to quantities of Christmas pudding from a single soldier to many;