From the early stages of the war it became apparent that the world trade markets would be affected by the widespread conflict. Here in New Zealand, food supply was just one example of  this;

"The Xmas Pudding.
It is only six weeks till Christmas, and many housewives have the idea that Xmas puddings should be made early, and allowed to improve with keeping. Here another small problem presents itself. The entrance of Turkey into the war means that the market for dried fruits, already bare, is going to be pretty well cleaned out. Sultanas, figs, and dates in particular are going to be in short supply, and prices are going up accordingly." (Auckland Star, 10 November 1914). 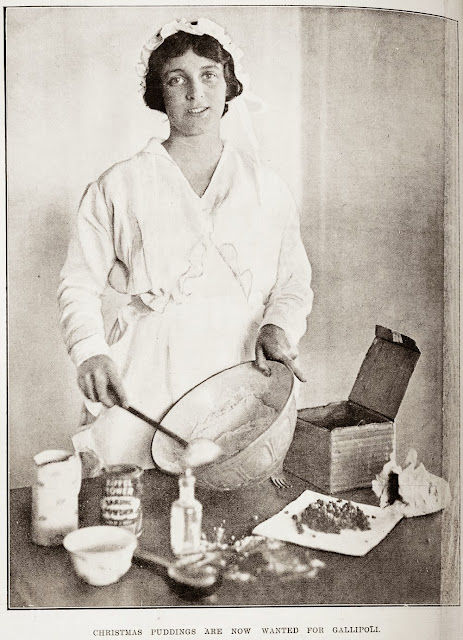 Despite these setbacks, Xmas pudding remained on the menu. In Wellington the Mayoress roused considerable support for the Christmas Pudding Fund. School children in particular, were keen fundraisers and contributors to the Fund. In July 1918 the Mayoress and her committee set to work on making a large number of the puddings. The Meat Export Company who operated out of Ngauranga Gorge kindly provided the committee with large enough premises to work in. The company also extended further support to the pudding makers by providing them a well earned lunch. The ingredients for the pudding were made possible by many supporters and donors; butter from D.J. Nathan & Co. and McEwen & Co.; bread from Messrs Kellow, Denhard, James, Raven, Lawrence, Flint and the Wellington Bread Co.; flour from Messrs J. Macintosh, Wright, Stephenson & Co.; eggs sourced from Carterton per the Mayoress, and Pahiatua per Mrs Thomson; suet from the Gear Company, E.Barber & Co., and the Wairarapa Farmers' Meat Company; and sugar from the Colonial Sugar Company in Auckland.
The preparation of these Christmas parcels also included thousands of signed postcards enabling the troops to easily post acknowledgement back to the school children who helped to make it all possible. Final send off of the parcels had to be made by about August to enable suitable guarantee of delivery of goods by christmastime to the war zone. 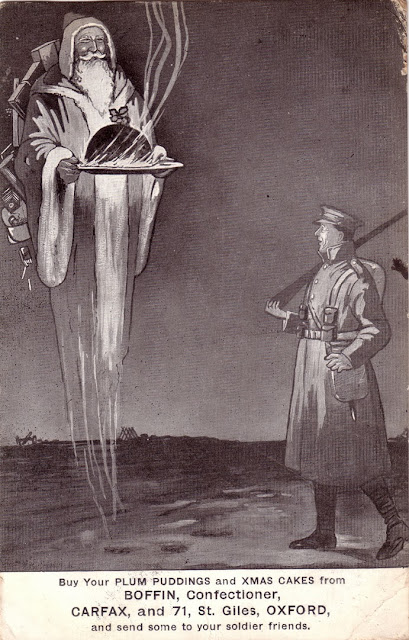 British postcard published by A.W. Ford & Co. Ltd, Printers, Bristol. Postmarked December 1914.
Printed on the back is the following message "Extract from Officers Letter At The Front. 'What I should really like are several large Plum Puddings sent out at different times so as not to be too heavy; we absolutely crave for something sweet out here.' "
Posted by Unknown at 23:00