A little brindle bulldog puppy was born on 16 June 1912 in Hampshire, England. He was named 'Pelorus Jack' after the famous Risso's dolphin who was well respected by seafarers as he helped navigate their ships through dangerous waters near French Pass in New Zealand's Marlborough Sounds. Pelorus Jack the dolphin, was first reported to have helped the schooner 'Brindle' sail safely through French Pass in 1888. He spent many years as a companion to shipping in these waters until his final disappearance, most likely of old age, in April 1912.
Pelorus Jack, the bulldog puppy spent his early months at the White Horse Inn in Ampfield, Hampshire. Mr J. Pomeroy, a New Zealander living in England then gifted Pelorus Jack to the crew of the new battlecruiser HMS New Zealand in February 1913. Pelorus Jack, now a naval rating of 'Puppy' was just six months old and destined for a life at sea.
On the 5th February His Majesty King George V made a royal inspection of HMS New Zealand while in Portsmouth. The postcard below shows a Guard of Honour in the left of the picture, Pelorus Jack on a leash and sitting on the podium, and the King standing in front of the band facing the camera with 'Fear God: Honour the King" on the bulkhead behind him. 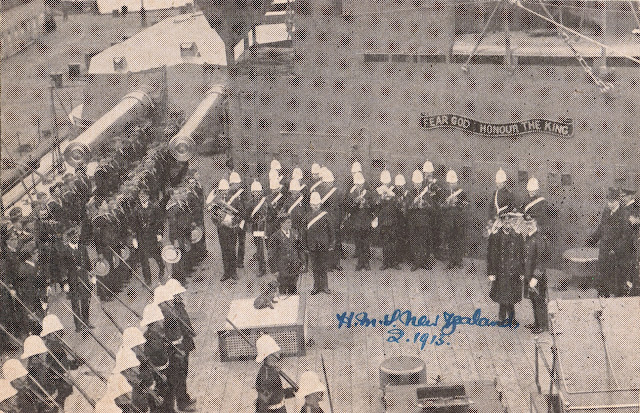 This postcard purchased from the Oscar Parkes Collection and his handwriting 'H.M.S. New Zealand 2.1913' can be seen on the face of the card in blue ink. This image also appeared in the Auckland Weekly News on 20 March 1913.

HMS New Zealand's maiden voyage in 1913 included a port of call at Johannesburg, South Africa. It was here that a special ceremony was held to present Pelorus Jack with a new collar. It was beautifully crafted with studs that were placed to spell the motto 'Onward'. The collar was also inscribed with "Pelorus Jack, HMS New Zealand, from New Zealanders in the Transvaal, March 1913." At Wellington, New Zealand, a local Boy Scout troop presented Pelorus Jack with a greenstone tiki which was proudly attached to his collar. 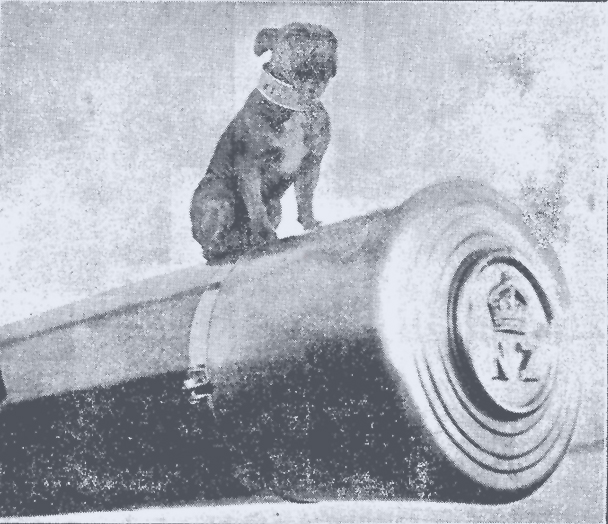 This picture appeared in the Grey River Argus newspaper on 29 September 1914 and read "Big Gun of HMS New Zealand. The Dog Watch - Pelorus Jack, the mascot of HMS New Zealand sitting on one of the big guns. It will be remembered that this ship took part in the recent naval battle off Heligoland."

Pelorus Jack completed the 40,000 mile maiden voyage on H.M.S. New Zealand in 1913 and in the following two years lived aboard this fighting ship which saw action at Heligoland in August 1914 and Dogger Bank in January 1915. Sadly, on the eve of the first Anzac Day commemorations in 1916 Pelorus Jack broke his neck and died from a fall down some funnel casing. He had been a much-loved, loyal and reliable pet mascot for the crew of H.M.S. New Zealand.
Perhaps it was due to keeping the ship's morale at time of war that necessitated a quick replacement, and to continue the good name of Pelorus Jack another bulldog in his name was welcomed onboard. The second Pelorus Jack wandered the decks of the battlecruiser during its combat at the Battle of Jutland in May and June 1916.
A thorough scan of this postcard showing H.M.S. New Zealand's 'P' Turret crew reveals Pelorus Jack held by one of the sailors; 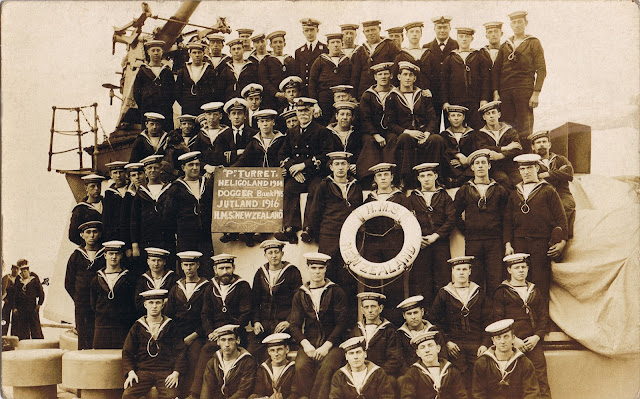 P Turret crew of H.M.S. New Zealand c.1916. A brief handwritten message from Arthur to his mother is recorded on the back of this postcard. Arthur has placed a small 'x' to mark himself at the extreme left of this portrait. 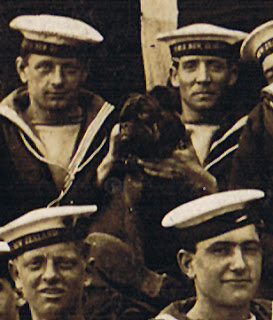 A 'close-up' of Pelorus Jack taken from the postcard image above. These sailors can be seen just above and to the left of the 'P Turret' sign.

After the war ended, and in 1919 Captain O.E. Leggett presented Pelorus Jack to the Deputy Mayor of Auckland as a gift to the citizens of Auckland city. Before he was allowed to make a new home on the mainland, Pelorus Jack was sent to Motuihi Island to spend six months in quarantine. Sadly he never made it from quarantine and died from poor health on the island.
Having the attention of a pet dog mascot onboard ship provided these sailors with a warm relief from the monotony of life out at sea, and helped to build morale during the difficult war years.
Pelorus Jack I and II - Lest we forget.
Posted by Unknown at 22:49