Home Beyond Their Reach

"...Whatever way I turn I find
The path is old unto me still.
The hills of home are in my mind,
And there I wander as I will."
From the poem 'In France' by Francis Edward Ledwidge, 1916

How quickly 'The Great Adventure' turned and instead became a longing to return home. Young men wrote to loved ones back home of how they wished and longed for their family, friends and homeland. Sadly, many never made it back to their own shores.The harsh winter and raging battles of October 1917 claimed many New Zealanders lives.

A short time in to active service in the trenches in Belgium, Private Norman Arthur Forde of the 1st Battalion Wellington Infantry was posted to a working party in July 1917 when he slipped and fell off duckboards in St Yves Avenue. He fell in to a shell hole but was safely pulled out by his mates only to find he had sprained his ankle. Norman was hospitalized for a short time but was soon back in the firing line. On the day before the launch on attack at the Battle of Broodseinde, Norman was killed in action. It was 3 October 1917 and he was just 21 years of age. Before his death, he had written to his sister Eileen on the postcard below;

"Dear Eileen,
Will be home in due course. Always think of your ducky darling brother.
Norman
with love
xxxxxxxx" 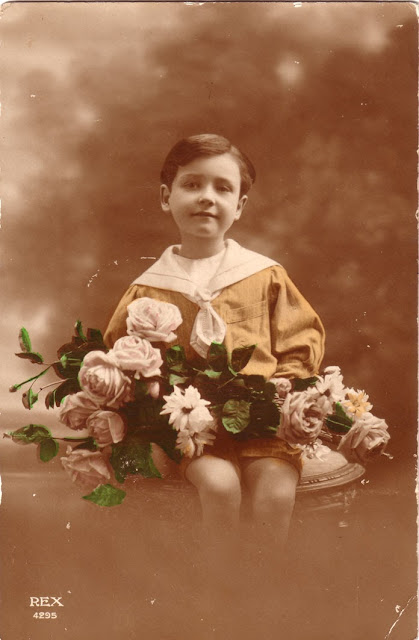 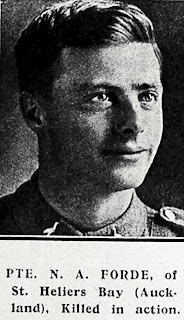 Norman's older brother, Gunner Hugh Douglas Forde of the New Zealand Field Artillery was also on active service in Belgium. He survived the First Battle of Passchendaele on 12 October 1917 but a fortnight later Hugh died from gunshot wounds to his thigh and hand on 26 October. The Forde family had lost two sons in the same month.
About ten months before his death, Hugh sent this postcard message to his sister Irene;

"30/12/16
Dear Irene,
Just a line to let you know that I am still safe and sound and haven't been killed by the Germans yet. I hope to be home in about 6 months time when peace is declared.
Your loving brother, Hugh.
P.S. Many happy returns of your birthday which I think is tomorrow. I will send you a present as soon as I can get in to a shop. Hugh." 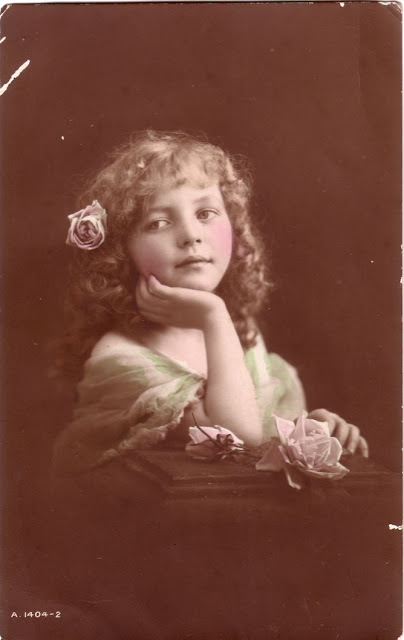 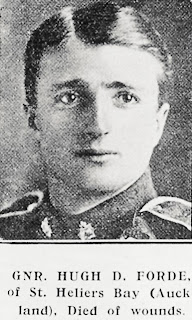 The obituary notice for Hugh and Norman Forde appeared in the New Zealand Herald newspaper on 10 November 1917;
"Lance Corporal Hugh Douglas Forde, who died of wounds on October 26, was the eldest son of Mr and Mrs F.H. Forde, of St Heliers Bay. He was 22 years old, and was educated at St John's College. After leaving college he joined the staff of the New Zealand Insurance Company, to which he was attached up to the time of his enlistment. He left with the thirteenth reinforcements, and after reaching England was for some months engaged in staff work at Sling Camp. He left for France early in January with a howitzer battery, in which he was serving when he received the wounds which proved fatal. A younger brother, Private Norman Arthur Forde, went with the twenty-second reinforcements, and was killed in action on October 4. He was educated at St John's College, and prior to enlisting was engaged as a motor mechanic in Auckland."

Hugh and Norman's cousin Roderick Crighton McFarland, also from St Heliers in Auckland, served in the New Zealand Field Artillery during the war. He died from wounds in Belgium just five days after his cousin Hugh Forde. Roderick's obituary appeared in the Hawera and Normanby Star newspaper on 11 December 1917;
"Gunner R.C. ("Roddy") McFarland, who was reported to have died of wounds in France on October 31st, was the eldest son of Mrs R.S. McFarland, Manukau road, Epsom and the late R.S. McFarland, who was formerly manager of the Bank of New South Wales in this town. Gunner McFarland was born in Hawera. Previous to his enlistment he was studying for his accountancy examination. He left with the 13th Reinforcements, and was trained as a specialist at Sling Camp, Salisbury. At the time of his death he was in the 15th Howitzer Battery. Three of his cousins were killed in the same battle and in the same month, viz., Corporal T. Nigel McFarland, Lance Corporal Hugh Douglas Forde, and Private Norman Forde, and two of his cousins in the Old Country, Flight Lieut. Curran, to whom the V.C. and Legion of Honor was awarded for bravery. Gunner McFarland had leave for ten days just a month before he was killed. He stayed with his cousin, Staff-Captain R. Corbett, at his place in Bournemouth, who was an old Auckland boy. Gunner McFarland was a nephew of Captain and Mrs J. Scott, of the Manor House, Epsom, and former residents of this town." 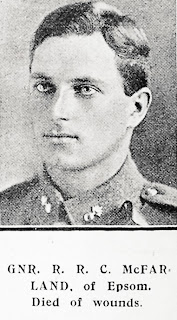 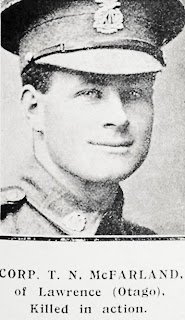 The New Zealand Division survived a long gruelling year in 1917 but not without loss of spirit and a loss of many many men. The Battle of Messines in June 1917 saw the loss of some 6,500 soldiers and the Battle of Passchendaele from 31 July to 10 November 1917 saw more than 7,500 others fall. Among them, were the Forde brothers and their McFarland cousins who sacrificed their lives on the Western Front which brought an end to any thought of ever returning home again.
Posted by Unknown at 21:43