A huge number of postcards were readily available for purchase during the First World War. One well known large postcard publishing house was The Rotary Photographic Company Ltd located in London. Their name derived from the use of rotary presses used to produce its postcards. This postcard publisher earned its reputation for good quality cards particularly in its production of 'real  photographic' postcards. Beauty and Verse were certainly two popular themes used in the design on some of the postcard series sold and distributed during the war. Series 7627 was one such group of postcards, and all in this series included the New Zealand flag and a real photographic image complimented by the addition of some verse, floral arrangements and either the New Zealand Coat of Arms or a fern bearing the initials 'N.Z.'

This attractive series struck the right chord with the New Zealand public. They were appealing because the cards were laden with sentimental and patriotic feeling. The postcard below, is a perfect example of this. The New Zealand flag and poetic verse by Talbot Everton form one part of the design, while a beautiful portrait of the famous British model and actress Gladys Cooper set among ferns and flowers completes the postcard. 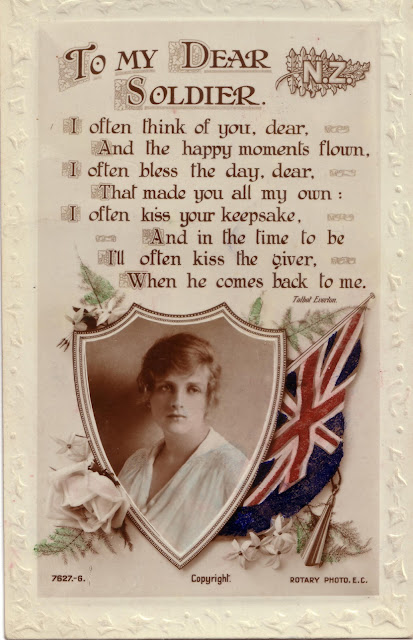 "To My Dear Soldier".
Rotary Photographic Series postcard no. 7627 - G.

Rotary used other famous models and actresses on their postcards including Phyllis and Zena Dare, Gertie Millar, Hetty King and Marie Studholme.

Similar style and theming continued on to other postcard series produced by Rotary during the war. The postcard below bears the Canadian Coat of Arms and flag, with an image of Gladys Cooper and of course, includes the maple leaf. 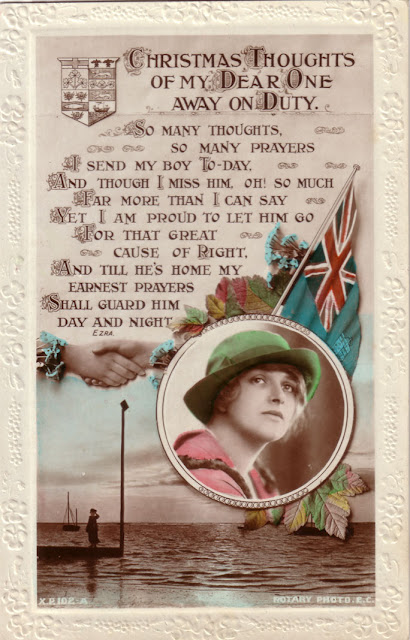 "Christmas Thoughts Of My Dear One Away On Duty."
Rotary Photographic Series postcard no. XP102 - A.

In 1921 seven companies merged to form the Amalgamated Photographic Manufacturers Ltd in London. One of these companies was Rotary Photographic Company Ltd and thus ended any further production of their picture postcards.
Posted by Unknown at 17:31