The first New Zealand Military Hospital to be established in England during the First World War was a large villa at Mount Felix, Walton on Thames in Surrey. The villa and its service buildings were set on lush green fields with peaceful walkways among flower beds and cedar trees, and with easy access down to the banks of the River Thames.

At the outbreak of war in 1914 the Mount Felix estate was used to accommodate British soldiers through until about June 1915. The estate was then refurbished in preparation for its use by the New Zealand Medical authorities and the hospital was officially opened by the New Zealand High Commissioner Sir Thomas MacKenzie in August 1915. 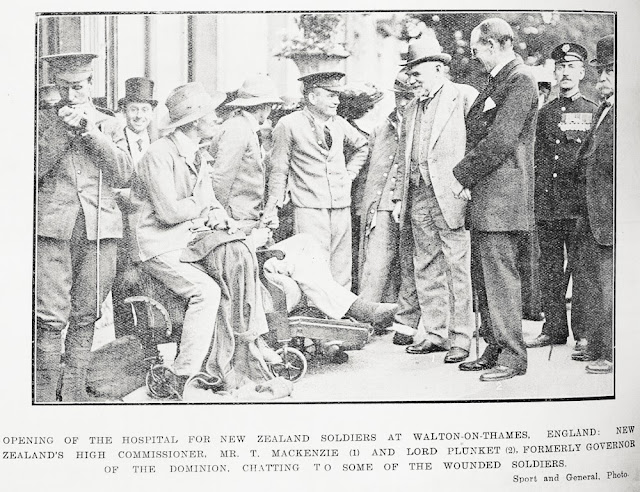 The hospital's first patients came from the Gallipoli campaign and as the war continued on, an ever increasing number of casualties demanded more treatment and more hospital beds. In August 1916, No.1 New Zealand General Hospital at Brockenhurst opened to help the swelling number of wounded New Zealand servicemen. The hospital at Walton on Thames then became known as No.2 New Zealand General Hospital. By October the latter hospital and huts on its grounds accounted for approximately 1,500 beds. This increased again when the New Zealand Medical Board obtained use of Oatlands Park, a large hotel located only a few kilometres away from the hospital. 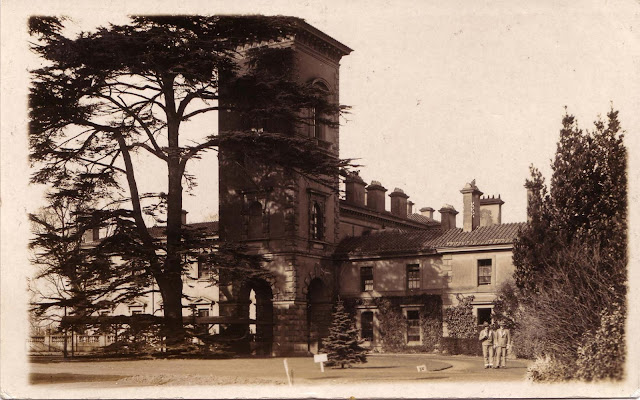 Real photographic postcard of the Square Tower at No.2 N.Z. General Hospital, Walton on Thames c.1917.

Private Leroy Henson of the Canterbury Infantry Regiment, and a farmer from Feilding New Zealand was a patient here in September 1917. He sent the above postcard to his sister Eileen and wrote;
"My Dear Eileen,
Just a P.C. to let you know that I haven't forgotten you. It is of a part of the hospital where most of the Officers are. The post office is just inside the door. I have been in there a few times. My arm is getting on slowly. This morning the Dr injected some stuff into it and then cut the skin away from the flesh a bit and then put a few stitches in it to draw it together a bit. It was about an inch wide all fleshy so it will look better now when it is healed up. He put in about four stitches and I might tell you it was no caper at all. I have seen a good lot of Louis (Rifleman Louis Mathews) lately but he is going on a fortnight's leave today and then he expects to be going back to N.Z. I get up and go about a bit now. We have been going about together and enjoying ourselves. I must close now and send one to Dulcie (Leroy's younger sister) with much love to yourself and all at home.
Your loving Bro., Leroy xx."

Despite his wounds Leroy Henson survived the war and returned to New Zealand where he found happiness with Olga Irene Harris whom he married in July 1919.

When the war ended in November 1918, No.2 N.Z. General Hospital continued to provide medical care for its patients through until its closure in March 1920. The hospital and Oatlands Park had treated approximately 27,000 patients.

Sadly the villa no longer remains. It suffered considerable damage from fire in 1966 and had to be demolished. The tower is one of only a few of the N.Z. Walton on Thames hospital structures still standing today.
Posted by Unknown at 22:04