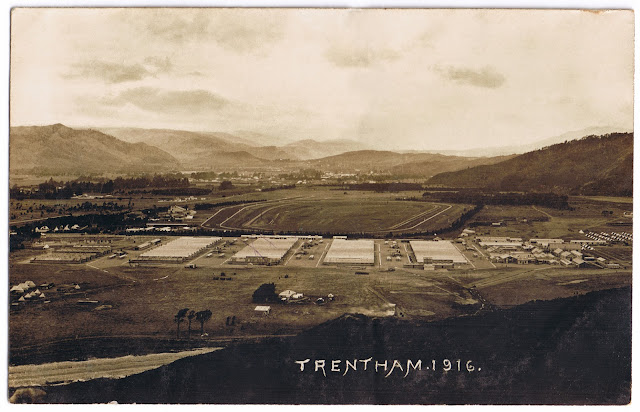 “Trentham. 1916.” This postcard does not have a postmark or postage stamp affixed.
Note the racecourse in the centre of the picture.

The postcard is addressed to ‘Tib’ and was sent by Lance Corporal August Albert Schulz of H Company, 4th Platoon, 16th Reinforcement, Trentham:

“Dear Tib,
I thought that I would just send you a card to let you know that I am still knocking round the world. I have been a fortnight in camp but haven’t got hardened to it yet as the boots are like iron clads & they make my feet sore but I will get used to it in time. I haven’t been out of camp yet but I might go out this week. I might go out to Petone to see if I can find Mrs Herdman but I will write to her first. We get plenty of stew but it must be good stuff as all the boys get fat on it. Do you know what time Hugh Andrews is coming in? Gerald told me that Kate is getting married next month.
Au Revoir with kind regards, Aug.”

August, a farmer by trade, did not survive the war. While posted to the 2nd Battalion 3rd NZ Rifle Brigade he was killed in action on 2 May 1917 in Belgium at 31 years of age. Sadly, the Schulz family had lost another son earlier in the war. August’s elder brother Herbert Alfred Schulz of the Wellington Infantry Regiment, Main Body, was killed in action on the slopes of Gallipoli on 29 April 1915. 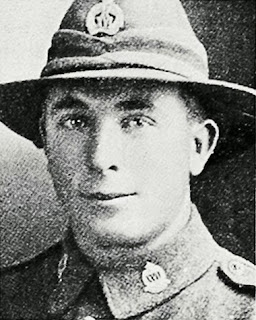 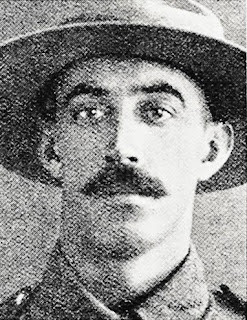