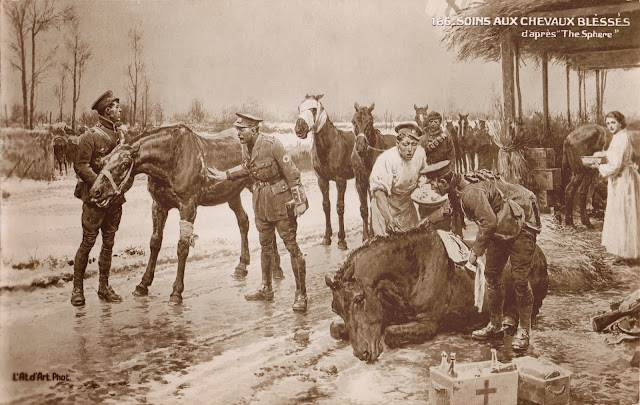 "Soins aux chevaux blesses" (care for injured horses).
Reproduced as postcards, and used in the British newspaper "The Sphere". 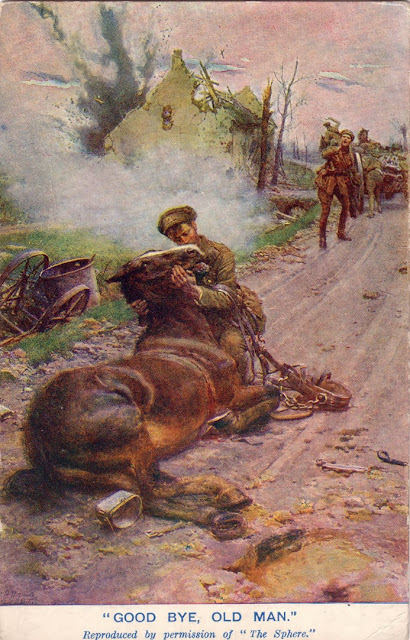 "Good Bye, Old Man." by Italian-born artist Fortunino Matania.
Reproduced as postcards, and used in the British newspaper "The Sphere".

In 1897 the 'Our Dumb Friends League' was formed by a group of people impassioned to provide care and well-being for working horses on the streets of London. Then during the Balkan War of 1912 the League introduced the Blue Cross Fund as a means of helping animals in the war. Just a few years later came the First World War and never had the world seen the need for, and scale of, such vast numbers of people and animals in warfare.
The president of the Blue Cross Fund during the war was Lady Smith-Dorrien, and the secretary was Arthur J. Coke. On foreign soil, the support of the French Government and the work of the Fund proved very special and invaluable during those terrible years. By late 1916 The Blue Cross Fund was given permission to open eight animal hospitals within reach of the battlefields. At these hospitals injured horses were afforded either expert treatment by fully trained veterinary staff or given a quick humane death if beyond saving.
In that same year the Blue Cross Fund had commissioned the gifted Italian artist Fortunino Matania to paint a special scene of an animal affected by the war. This resulted in what would become one of the most poignant and memorable paintings of the First World War. The scene was subtitled "An incident on the road to a battery position in Southern Flanders". It depicts a panic stricken and dying horse supported in the hands of its soldier companion, while screaming shells strike the roadside and building drowning out the desperate shout from the soldier's colleague further up the road. The original painting is on display at the Blue Cross Fund's animal hospital in Victoria, London. Matania's exceptional piece was reproduced on to postcards (shown above) and entitled "Good Bye, Old Man."
Here in New Zealand in October 1916, Wellington resident Robert Darroch was moved by the wonderful and courageous work of the Blue Cross Fund. This inspired him to help organise local fund raising so that financial contributions could be made to the Blue Cross Fund. Children at Wellington's Roseneath School and musical recitals helped build proceeds which were then sent to the Fund overseas. 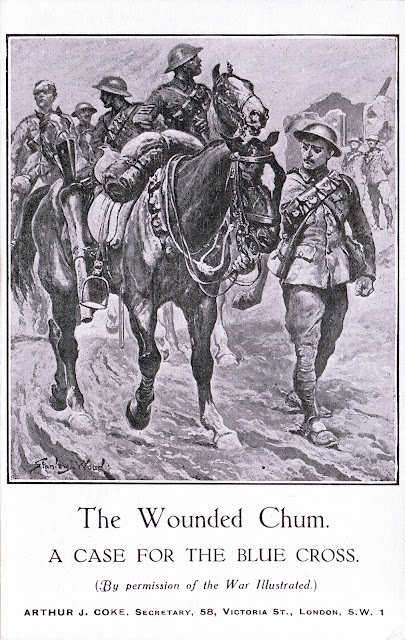 "The Wounded Chum. A Case For The Blue Cross." by British artist Stanley Wood.
Posted by Unknown at 17:13