The Tragic Loss Of The Aparima And Her Crew

The Union Steamship Company of New Zealand's ship Aparima left London for Barry in South Wales to take on a load of coal in November 1917. When in service as a troopship she was renowned for being a slow traveller managing a maximum speed of only 12 to 13 knots. As she sailed down through the English Channel, her skipper Captain James Gerald Stokely Doorly took her as close to the coast as he dared, and set the Aparima on a zig zag course, both measures taken to give the vessel the best opportunity to avoid an attack by a German U-boat.
As the Aparima sailed passed the Isle of Wight and held a course about 4 kilometres south west of Anvil Point, German U-boat 40 under the command of Oberleutnant Hans Howaldt fired a torpedo in to her port side. The sudden explosion happened at about 12.50 a.m. on 19 November 1917, and within 8 minutes the Aparima was sunk.
Of the 110 crew onboard, 56 were tragically lost. The Aparima's crew included men from Britain, India, Australia and New Zealand. Among those who lost their lives were seventeen cadets whose sleeping quarters had been close to where the torpedo had struck.
The New Zealanders who were killed on the Aparima; 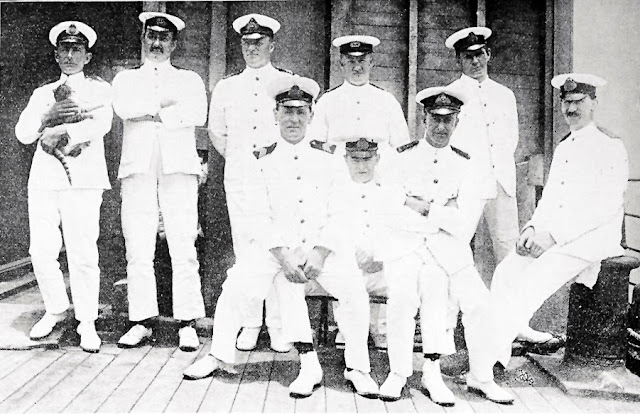 Captain Doorly, born in Trinidad, survived the sinking of the Aparima. He jumped overboard in to the sea and was lucky enough to be picked up by one of the lifeboats. He had been under the employ of the Union Steam Ship Company of New Zealand since 1905. He married Ina Muriel Whitson in Dunedin in 1908. During the First World War he was Master of troopships Navua (1915 and 1916) and Aparima (1917). After the war ended, his career continued on the seas and in the mid 1920's he joined the Port Phillip Sea Pilot's Service in Melbourne, Australia. Doorly also enjoyed some success as an author and musician. In 1951 he returned to New Zealand and five years later, died in Wellington. 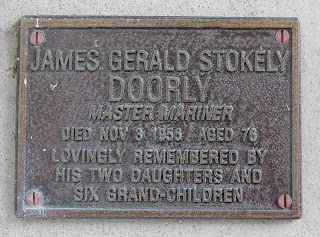 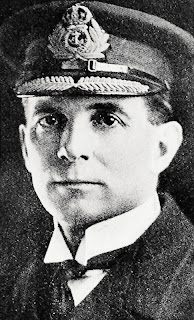 Before the tragic loss of the Aparima during the war, she had enjoyed some success as a cargo steamship on the Union Steam Ship Company's India service having made over thirty voyages to Calcutta. When war broke out, the Aparima was requistioned as a troopship by the New Zealand Government. As HMNZT 19, 26, 32 and 46 she carried New Zealand soldiers to Egypt. By April 1916, many New Zealand soldiers were deployed to Western Europe and the Aparima as HMNZT 61 and 76 journeyed to England. 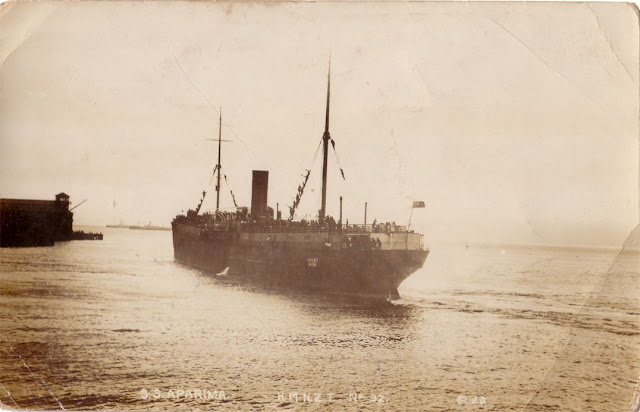 Written on the back of this postcard;
"Nov 5th.
217 Cuba St
Wellington

Dear May, These are the 5 boats that left with 7th Reinforcements. Thought you would like to have all the boats. This one was the last to leave the wharf. It was there 10 past 6 and the sun was almost down. Writing to mother soon. Received letter today. Love to all, Annie."

Today, the wreck of the Aparima lies at a depth of 42 metres on the bottom of the English Channel, about 4 kilometres south west of Anvil Point, England. This 5,700 ton wreck is said to stand 8 metres high in places, is 430 feet long, and various items of the ship such as the 4.7inch gun, mooring cable and anchor are still visible and intact for divers to explore.
Posted by Unknown at 22:32