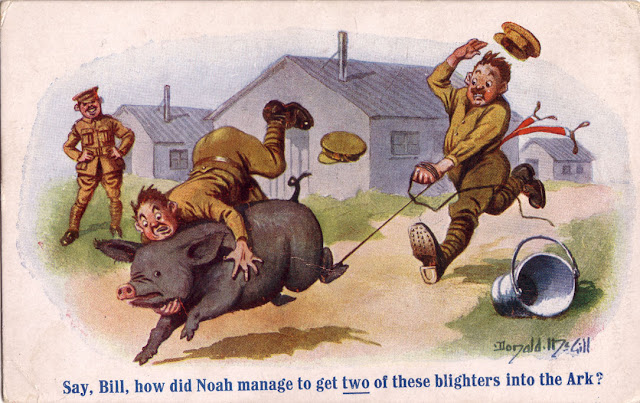 Some postcard humour from British artist Donald McGill.
This card was published by Inter-Art Co., Florence House, Barnes, London and is part of the "Comique" Series, no.2184.

The message on the back of this postcard was written by a New Zealand soldier named Archie while at Brocton Camp in England. He has dated the message 14 April 1918 and addressed it to his brothers Harry and Will...

"Dear Harry & Will,
Just a line. I am still in Old Blighty and going strong. We are having rumors of war here occasionally. Expected to go over last week but it was a washout. Am on the Lewis gun stunt now as they are found to be very effective implements, fire six hundred shots a minute and can be used single handed if you have the ammunition. I was talking to a young man from Omata on Friday. He's in the 34th, says he remembers you at the dances. The 34ths have just got out of Isolation and a 150 of them are on the mat this morning for being out late, went to Stafford and couldn't get a bus back. I had to walk myself but got an early start, its about 6 miles. Have just seen that Will was turned down, sine die in the Budget, so you will be alright. Should like to have more news from home. Only get Olga's letters and an odd one.
Wishing you good luck,
Brother Archie."
Posted by Unknown at 20:21