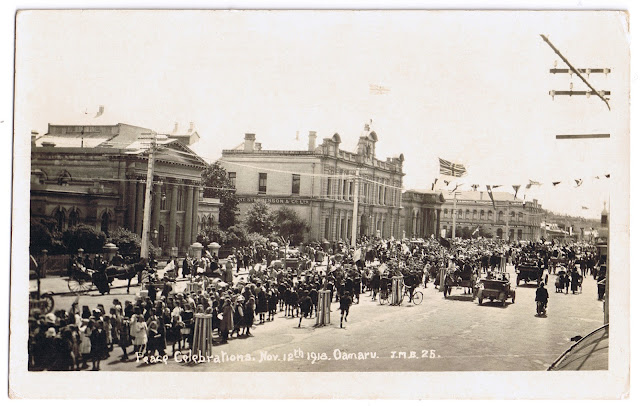 This fine view is looking down Thames Street in Oamaru. The grand architectural building with Corinthian columns on its façade to the far left of the picture is the Oamaru Court House. The larger building in the centre is the Opera House.

Mayor Robert Milligan announced in the Oamaru Mail that at the cessation of hostilities a public thanksgiving service would be held in the Opera House on 13 November 1918. With jubilation at the news that war was finally over, the people of Oamaru took to the streets to celebrate and rejoice with as much colour, music and pageantry as they could gather. A procession was formed on Thames Street as shown above, led by the 10th Regimental Band. They were followed by various decorated cars and lorries, Red Cross nurses, Salvation Army and school bands. Many of the Oamaru schoolchildren carried patriotic flags and the popular noise-maker – empty kerosene cans. Note that the street is shared by horse-drawn carts and motor vehicles.
Posted by Unknown at 19:57