"With sturdy stride they march away
To the roll of the kettle-drums brave,
To cheery trumpets blare and play
And the starry banners wave.
They need no spurs to urge them on;
Their hearts are beating fast,
And tear-bright eyes have smiled and shone
As rank on rank swept past.
From columns deep of marching feet
The dust-clouds scatter and blow,
And boom-boom-boom! the big drums beat
To let the nations know..."
From  a song written by Will Lawson (1876-1957). 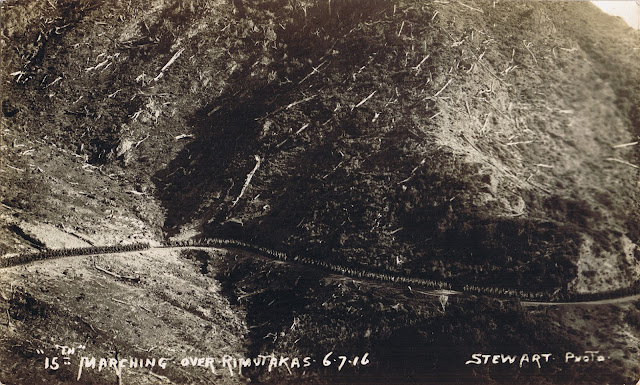 The Fifteenth Reinforcement marching from Featherston Military Camp over the Rimutaka Ranges and down to Trentham Camp in the Hutt Valley.
Real photographic postcard taken by John Roger Stewart, 6 July 1916.

Over 60,000 New Zealand men trained to become soldiers at Featherston Military Camp during the First World War. At the end of their training at Featherston, many of these soldiers marched from camp over the Rimutakas along its gravelled road. They stopped for a refreshments break at the Rimutaka Road Summit and bivouacked overnight near Kaitoke (and some reinforcements a second time at Mangaroa Valley) before arrival at Trentham Camp. 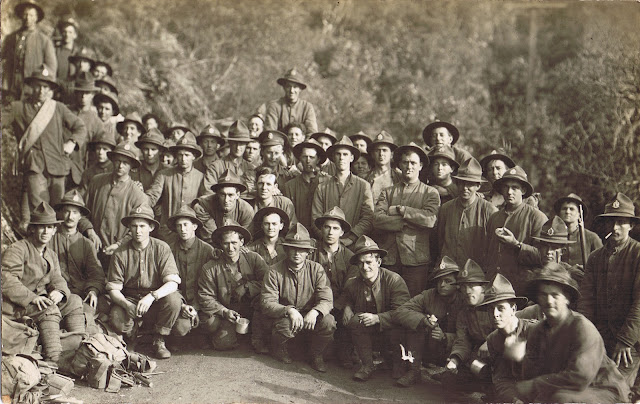 Real photographic postcard showing some of the men from B Company Sixteenth Reinforcement on a refreshments break whilst on their way over the Rimutakas to Trentham Camp c.May 1916.

This postcard was written on the back by Private James Marshall Lawrence of B Company 16th Reinforcement;
"Dear Irene, I was going to send you a button off my uniform, but as we are going to Christchurch to parade there, I will have to keep them on, so I am sending you this P.C. instead, as a little keepsake from this little soldier. Kind regards to Father and Mother. Thank him very much for those addresses he was going to send me. Not goodbye, just so long.
From Corpl J.M. Lawrence, 16ths (Record Breakers)"
James received a gunshot wound to his right hand in June 1917 but returned to New Zealand after the war ended, safe and well.

"The march of the Sixteenth Reinforcements from Featherston to Trentham took place on Sunday. Of nine companies in the draft, five marched as far as Kaitoke, and the others, A, B, C and J companies, marched all the way to Trentham. This was the first time this has been done. The little bootmaker mascot of the Fifteenths joined the column at Trentham, and marched all the way to Trentham. The Sixteenths are regarded as the strongest draft that has yet crossed the Rimutakas."
Source: Colonist, 9 August 1916

Two separate postcards help form this wonderful panoramic view of the 23rd Reinforcement marching from the Rimutaka Ranges and down in to Kaitoke. They are seen here crossing the Pakuratahi River on 15 February 1917. The photographs were taken by Nelson-born John Bernard Arnold, who later in the year  was recruited in to D Company at Trentham Military Camp. 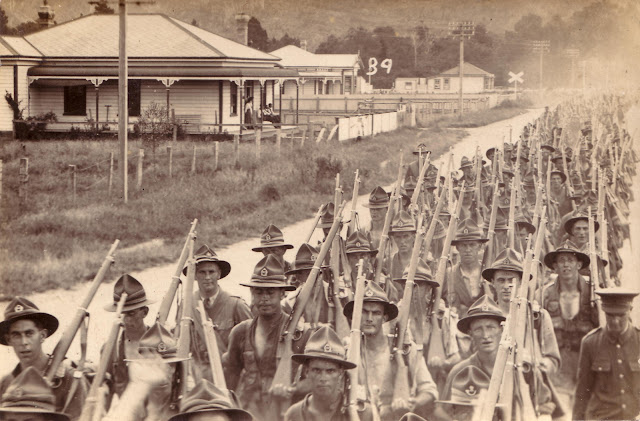 Almost at destination end! These New Zealand soldiers have crossed the railway line evident by the crossing sign seen in the background. The sound of marching boots and the cloud of rising dust have drawn the attention from a family looking on from their verandah. These soldiers are likely making their way along Sunderland Avenue, just a short distance away from Trentham Camp.