The "Leaning Virgin" of Albert

After the New Zealand Division had come through the Battle of Flers-Courcelette in September 1916, many New Zealand troops left the front lines on the Somme and passed through the French town of Albert. A very noticeable landmark was the bomb-damaged statue of the Virgin Mary holding a child which was fastened to the top of  the town's cathedral or "Basilica of Notre-Dame de Brebières". The most remarkable thing about this statue that caught the soldier's eye was that it had fallen over in to an almost horizontal position as a result of a German artillery strike in 1915.
As the New Zealanders passed through the town on 7 October 1916 many stared up at this unusual sight and pondered on local legend that said when the statue should finally fall, the war will come to an end.
New Zealand Brigadier General Herbert Hart commented "It looks most weird, and one would expected it to fall any moment."
The statute was reported to have finally fallen to the ground after a bombardment on Albert in April 1918, some seven months before the war ended.
Many photographs and postcards were taken of this surreal skyline scene, and what follows is some examples of these postcards c.1915 - 1916. An early artist's impression of when the bomb struck the base of the statue in 1915.
French Red Cross postcard published in Paris. 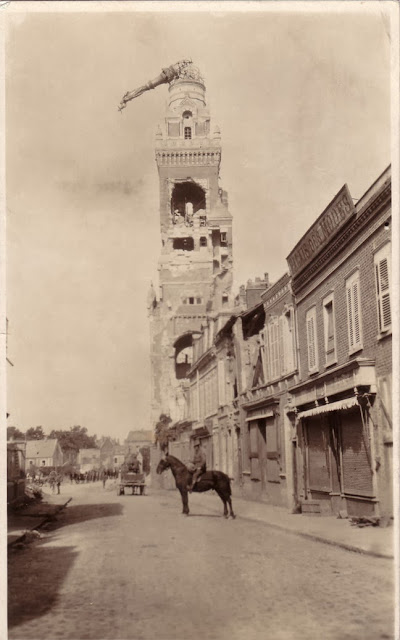 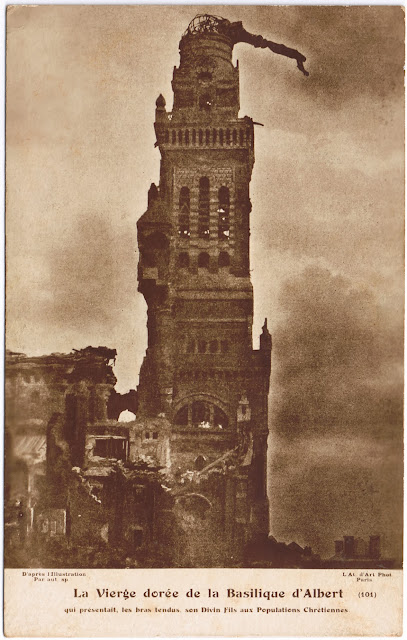 Another postcard image of this famous scene before the statue finally fell in 1918.
Posted by Unknown at 23:30